Our first step in finding the scam bots was to do research on the current status of the problem. We ran a quick google search on cryptocurrency scam bots and found some interesting articles showing examples of tweets that had been identified as scam bots.

The typical structure for these scams is for the bot to adopt the username and profile picture of a prominent Twitter user. The bot then comments on that prominent user’s posts claiming to be donating a large amount of cryptocurrency to anyone who sends the bot a small amount as an entry fee. Other bots then interact with the original bot’s post, making it seem legitimate.

After reading a few of the tweets we found key patterns that helped us derive our search terms. The first pattern we noticed is that many of these tweets were using the words, “give away,” “giveaway” or “donation.”  The second pattern we noted was that the bots were referencing the cryptocurrency by a few particular names. We noticed multiple uses of the words, “bitcoin” and “ethereum,” as well as a few common abbreviations including “BTC,” “ETH,” and “crypto.”

Although many users have seen this as an obvious scam, some users, especially those new to cryptocurrency investing, have been reported to have fallen for the ruse and lost their valuable cryptocurrency. The problem has become so invasive that the major voices in technology have begun calling for Twitter to find a way to eliminate or mitigate these invasive bots. Elon Musk is one of the most recent tech leaders to comment on the onslaught of invasive bots.

After researching the scams and identifying the patterns, we began to develop a search string to attempt to find cryptocurrency scams. We chose to design our search for Scraawl’s Premium Advanced because it allows us to create specific search strings using boolean logic:

Once we had developed a search string, we ran our report and collected 10,000 posts to perform our analysis on.

Typically, the first step we take in cleaning our datasets is to evaluate the basic statistics. More often than not even the most beautifully structured searches include noise that is irrelevant to our topic, but technically matches our search criteria. One of the easiest ways to eliminate this noise is to filter from the basic statistics. Another option is to begin filtering Advanced Analytics, then refining the search later in the basic statistics.

We chose to begin filtering from with one of our Advanced Analytics, and ran Topic Modeling. This analytic provides us a deeper understand of the conversations taking place in our dataset by using a probabilistic score to represent likely topics. This break down of topics showed us a few clear conversations, which we were able to identify as possible scams. Each topic seemed to approach the concept of bitcoin “giveaways” but many emphasized follows, retweets, and joining their community hosted off of Twitter. 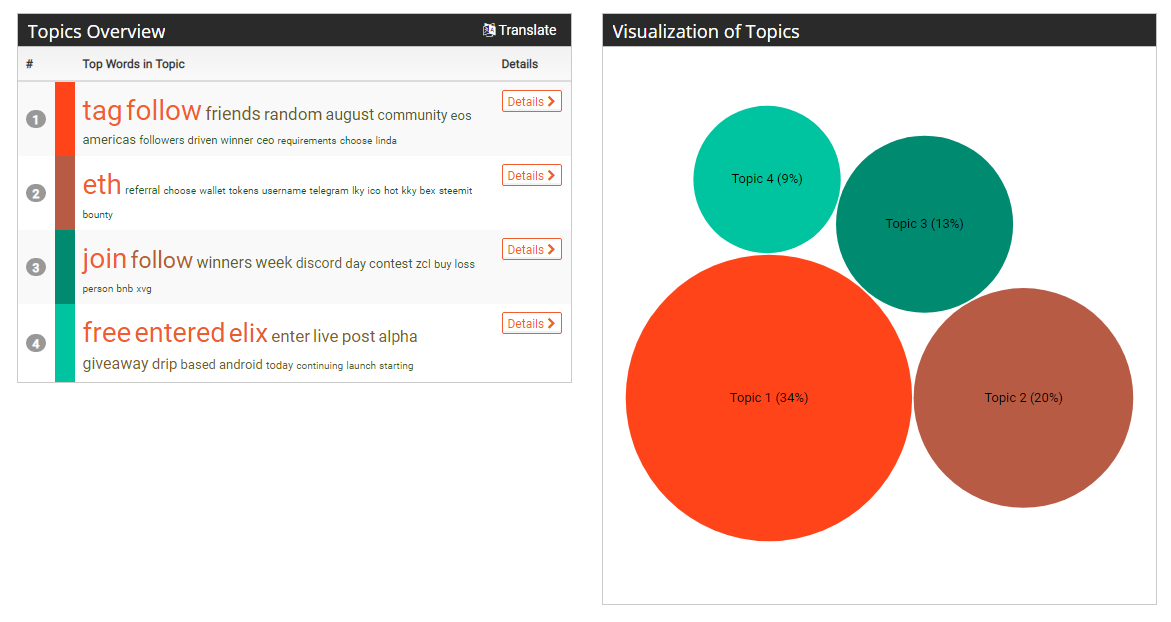 As we evaluated the results of Topic Modeling, we found some particularly interesting content under topic 3. From the top posts in this topic we noticed that the structure of the tweets most mimicked the posts we found in our previous research.  These tweets expressly mentioned a raffle of a large amount of bitcoin which could only be entered by donating a much smaller amount of bitcoin. We decided to dig deeper into this topic, so we chose to keep only matching for topic 3. Once we had our much smaller dataset, we decided to run the Community Detection analytic to identify the groups within this suspicious topic. 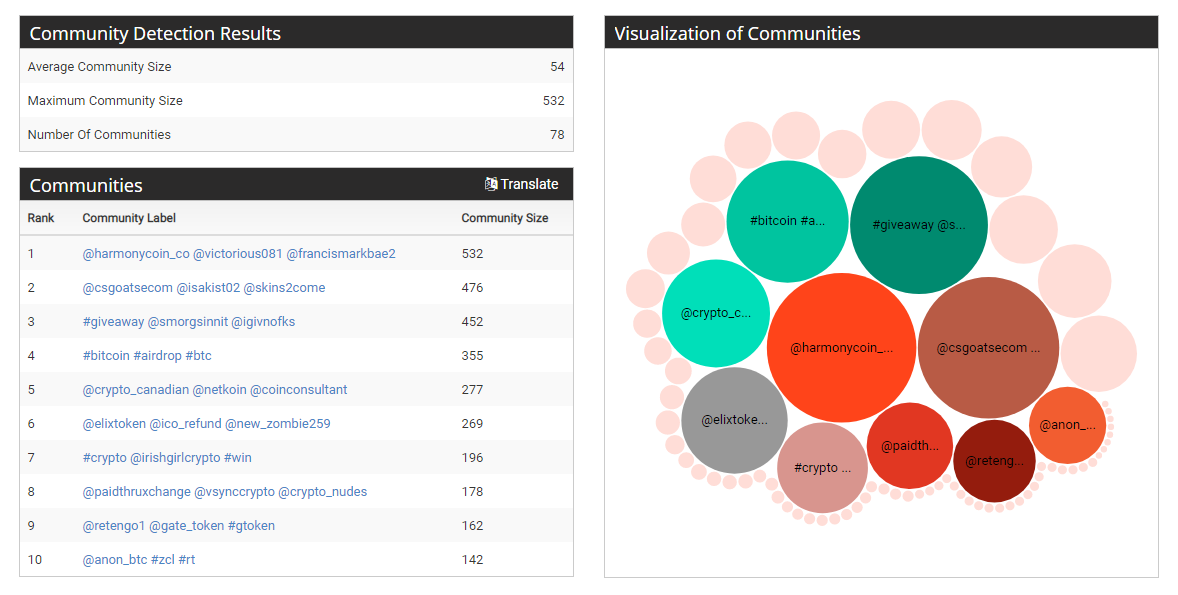 We found a few interesting communities within topic 3. One of the largest communities we identified was primarily centered around an account that was promoting an airdrop of a new bitcoin. The account has since been deleted.

Another interesting community we identified was focused on an account that was releasing predictions for bitcoin prices. When we dug deeper into the replies to this account we found that many users were commenting that they believed the account was publishing fake data as part of a pump-and-dump scam. Other users also identified that most of the content the account was posting was stolen from other accounts, and provided screenshots of the original posts as proof.

The last community we found particularly interesting was a series of accounts claiming to be associated with the hacker group, Anonymous. This group was discussing a bounty for Anonymous Bitcoin. Bounties are an arrangement were a cryptocurrency offers an incentive for user participation in specific tasks, often taking the form of marketing efforts or bug reporting.

We found evidence of multiple scams throughout our dataset, but we still haven’t been able to identify which if any of those accounts are managed by a bot. To answer this final question we concluded our research by running the bot detection analytic. Scraawl’s Bot Detection Analytic evaluates 20 common characteristics of bot behavior to provide a confidence rating for each account from low to high. Scraawl’s Bot Detection tool identified 10 suspected bots in our our filtered report. 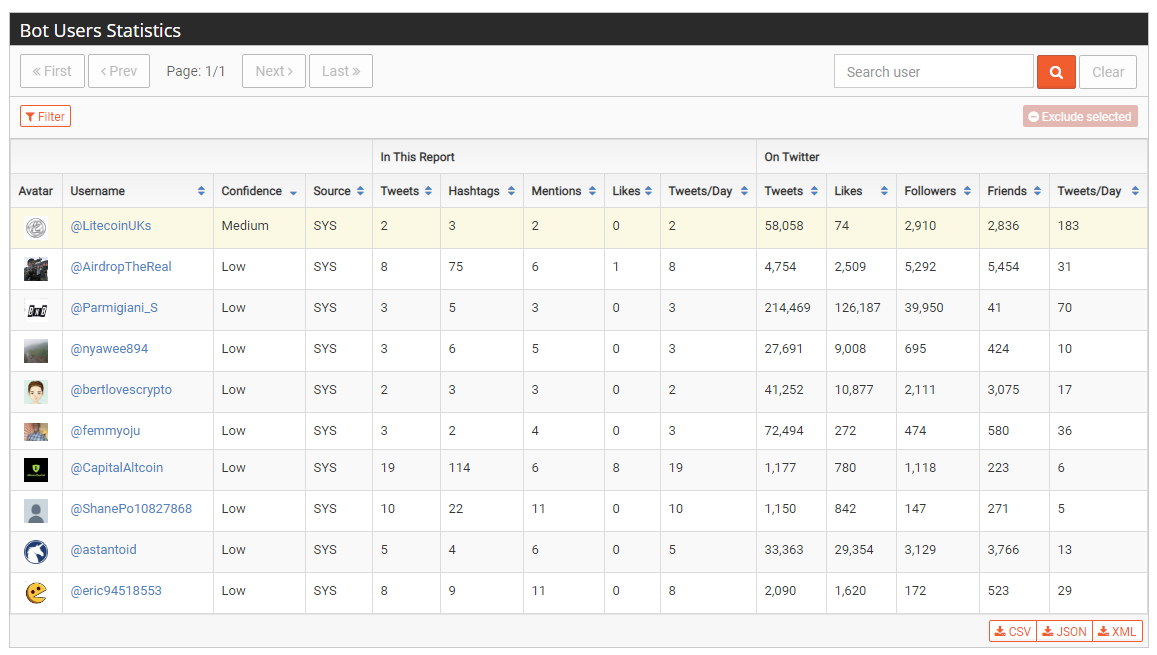 In this report, we used Scraawl’s powerful Premium Advanced Search as well collection of Advanced Analytics to search for cryptocurrency scam bots on Twitter. We identified a topic within our report that was closely related to cryptocurrency scam bots’ posts we found in our research. We then located three distinct communities of interest that we thought might contain bots. Once we were sure that the data in our report was relevant to our overall research, we ran bot detection and identified 10 bots.

The scam bot epidemic on Twitter has plagued the platform for the recent past. Twitter’s CEO has responded to requests from Twitter users in the cryptocurrency community with assurances that he is working on a providing a solution to the scam problem. To this effect, Twitter has also begun removing fake and spam accounts. According to an article by NPR, Twitter’s account removal efforts will eventually reduce the platform’s total user base by 6%.

Searching for bot activity like cryptocurrency scam bots just got even easier. Scraawl is pleased to announce that our bot detection analytic was recently rereleased with a series of improvements including:

The bot detection tool has previously shown three columns of information: User, Profile, and Bot Behavior Confidence. The tool now includes a richer data experience for users, as seen in the image above. The bot detection tool now offers data from within the report about each prospective bot as well as from each possible bot’s profile. The new data for each bot includes the number of tweets, hashtags, mentions, likes and tweets per day from each prospective bot.

In addition to the richer data available on the Bot Detection table, Scraawl has also introduced a new Bot User Statistic page for each of possible bot. This page is similar to the User Statistic page found elsewhere in Scraawl, with an additional layer of data specifically provided for suspected bots. The data provided on the new Bot User Statistics page includes the name of the user, the total number of posts on their account, their total number of followers or friends as well as the date the account was created. 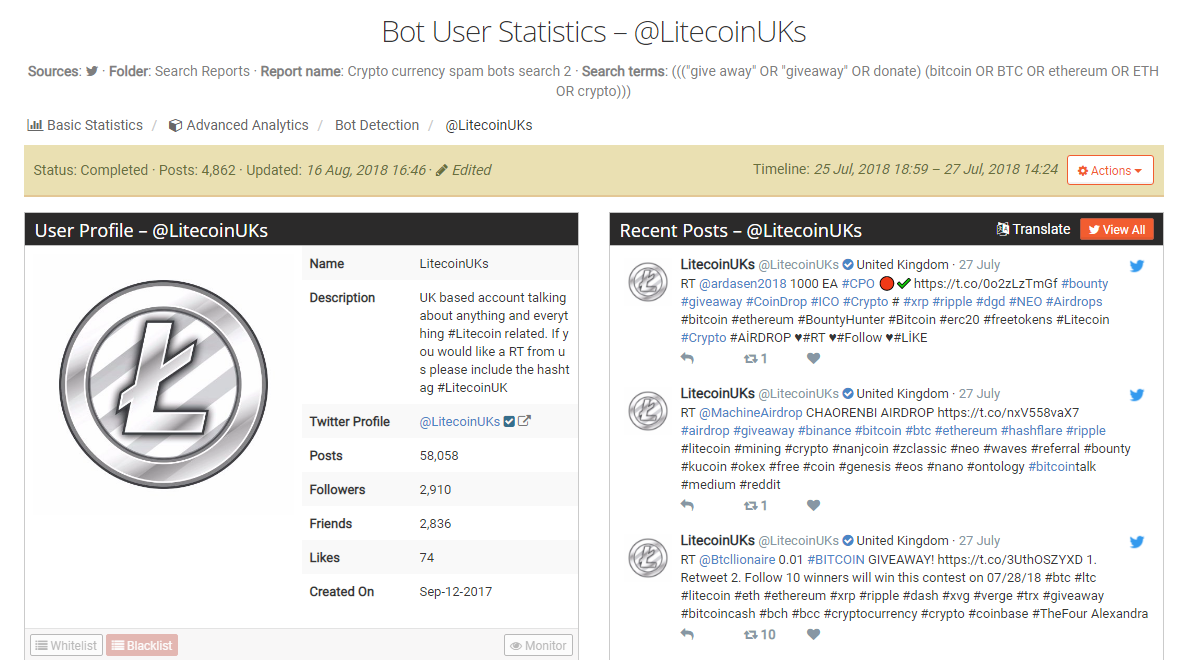 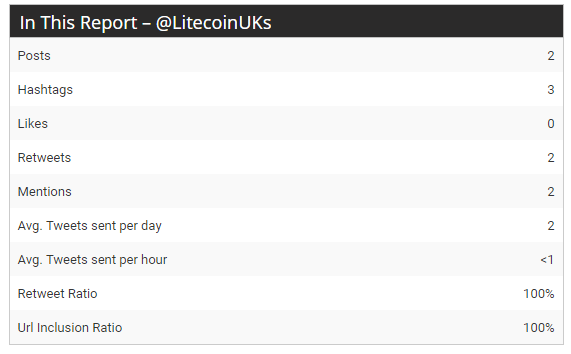 Lastly, There are frequency lists for each bot that includes the accounts top words, hashtags, mentions, sources, entities, languages, and URLs.

Coming soon, Scraawl’s bot detection tool will also be updated to include a whitelist/blacklist feature. This new capability will provide users with the ability to mark a user account as not a bot or as definitely a bot.

Scraawl is a product of Intelligent Automation, Inc. (IAI), a Rockville, Maryland-based technology innovation company. Our mission is to develop a comprehensive solution for brands to gain actionable insights by listening, searching, extracting, and analyzing social media conversations and large text corpuses. We have developed a set of advanced analytics that leverages the state-of-the-art in big-data, machine learning, natural language processing, and graph theory. Our business case centers on helping brands and agencies understand their global audience, manage customer experience, improve public relations, drive strategic growth, and develop new clients. With analytic capabilities across multiple languages, and its ability to execute on desktops, tablets or mobile devices, our goal is to provide all the analytics a user will ever need ─ at their fingertips, anytime, and anywhere. For more information on Scraawl, request a demo and to learn more about the wide range of advanced analytics offered in Scraawl’s professional, premium, or enterprise packages. You can also sign up for a free personal account and start exploring some of Scraawl’s basic search and analytics capabilities.