Which Social Media Platform is Right for You? Part 2

In the Which Social Media Platform is Right for You? Part 1 Twitter and tumblr to determine who used the platforms and what conversations they were having.  We will now look at Facebook and YouTube and perform the same evaluations. We will continue to evaluate demographics information for each platform and combine this data with Scraawl’s analytics insight, using the test case we developed in the last blog. We will run a report on the term “machine learning”, for Facebook and YouTube.

Facebook differs from Twitter on a few key points. Facebook does not place tight character limitations on posts, so the content is capable of being much longer form that a 280 character tweet. Additionally, while Twitter is a speaker-to-audience relationship, Facebook is designed for a peer-to-peer relationship. Facebook shares some communication styles with Twitter, such as likes, comments, and shares. Facebook, however, also has a few additional means of communication including reactions, and groups. Groups are some of the most effective in providing Facebook users clear, recurring communities around their interests. These groups tend to also be skewed toward female participation, with women 40 percent more likely to create meaningful Facebook groups. 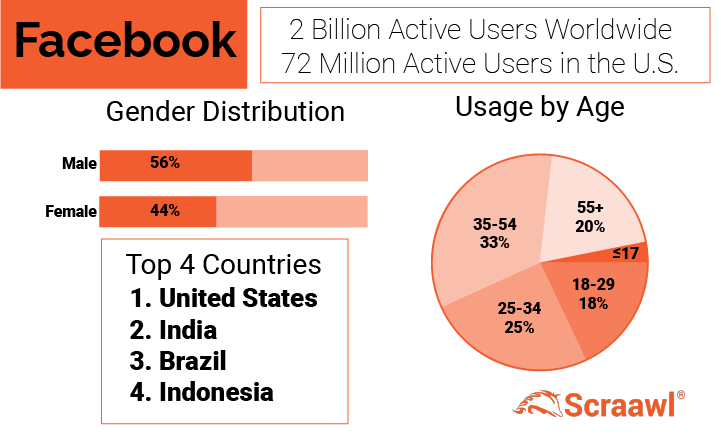 With over 2 billion monthly active users, 72 million of which reside in the United States, Facebook is one of the most prevalent social networking platforms across the globe. A majority of Americans of all ages, except those over 65, have Facebook accounts. In the United States, approximately 82% of 18-29 year olds have Facebook accounts, as well as 79% of 30-49 year olds. On average people check Facebook 8 times a day, and 3 out of 4 Facebook users are active daily. Only 12 percent of Facebook users are in the United States. India, Brazil and Indonesia are the next three countries in terms of Facebook usage. Like Twitter, the gender distribution of Facebook is also a majority male, with 56% male and 44% female accounts.

Due to Facebook’s API restrictions, Scraawl can only search public pages. To determine what people were saying about machine learning on Facebook, we did a quick Google search for machine learning public pages. We decided to run a search on the page “MachineLearningMastery” which has over 27,000 likes and over 30,000 followers. Within the top words of the MachineLearningMastery group we found terms such as “Lesson” and “Introduction,” which leads us to believe that a large focus of this group is on education.

YouTube has over a billion active users, with content constantly being created on by 50 million people. The gender distribution of users on YouTube is 62% male and 38% female. YouTube boasts better retention of the 18-34 year old age range than any cable network. According to YouTube, 37% of 18-34 year old binge-watch on YouTube often. 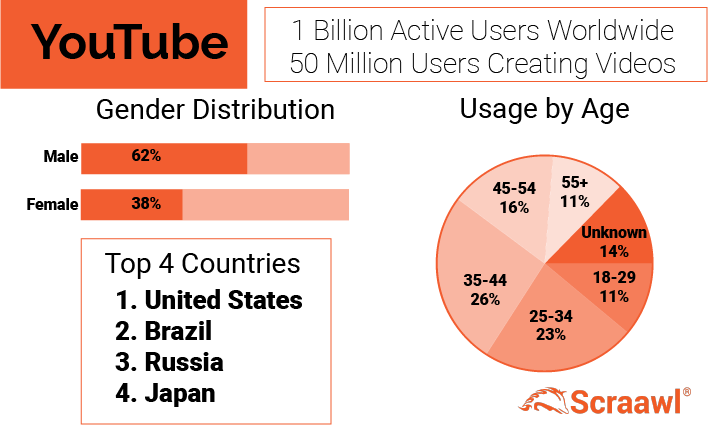 The U.S. accounts for approximately 20% of YouTube’s user base. The other 80% of the users occur in 87 countries and 76 different languages. YouTube services 95% of the internet population.

In our search of YouTube we found 519 posts originally. Upon closer inspection of the dataset, we found that many promotional videos for Play Doh educational toys, which involved the terms machine and learning, had been included in our dataset. We filtered this noise out by clicking on the Top Words’ “Details” button and filtering out terms that were not relevant, such as children, kids, and Doh. We were left with 420 videos that related to machine learning. In the top words for the videos that remained, we found similar terms to those found on tumblr. The raw data revealed that most of the videos were lectures or presentations about machine learning. 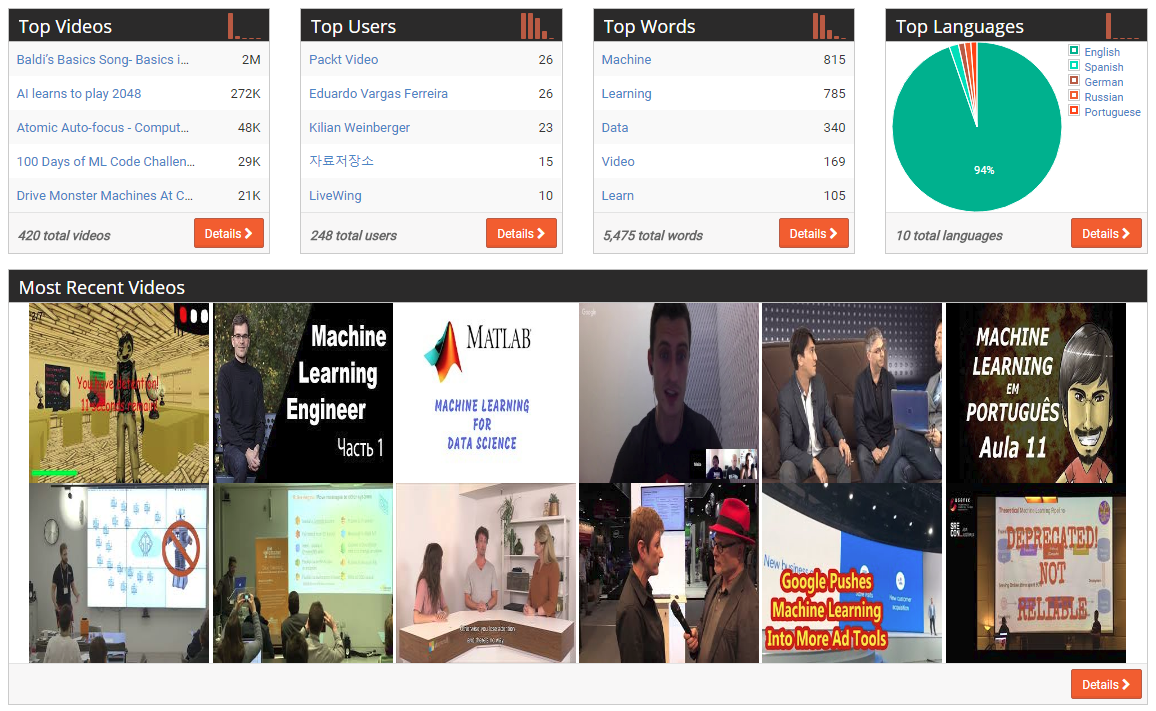 We can use the demographic information as well as our Scraawl insight to make assumptions about the age, gender, language, and best avenues of engagement for each platform. We can then determine the best avenues for our marketing research and communication efforts.

If you missed part one, you can find it here:

Which Social Media Platform is Right for You? Part 1

Scraawl is a product of Intelligent Automation, Inc. (IAI), a Rockville, Maryland-based technology innovation company. Our mission is to develop a comprehensive solution for brands to gain actionable insights by listening, searching, extracting, and analyzing social media conversations and large text corpuses. We have developed a set of advanced analytics that leverages the state-of-the-art in big-data, machine learning, natural language processing, and graph theory. Our business case centers on helping brands and agencies understand their global audience, manage customer experience, improve public relations, drive strategic growth, and develop new clients. With analytic capabilities across multiple languages, and its ability to execute on desktops, tablets or mobile devices, our goal is to provide all the analytics a user will ever need ─ at their fingertips, anytime, and anywhere. For more information on Scraawl, request a demo and to learn more about the wide range of advanced analytics offered in Scraawl’s professional, premium, or enterprise packages. You can also sign up for a free personal account and start exploring some of Scraawl’s basic search and analytics capabilities.