Which Social Media Platform is Right for You? Part 1

In the age of digital marketing, it can be challenging to identify the ideal audience for your brand and messaging. It can be even more difficult to participate meaningfully in an ever-changing social media conversation. Understanding which social media platforms appeal to which key demographics and how user interactions vary across platforms can help you maximize your interactions with your audience. In this post we will use published demographics data along with data and analysis gathered from Scraawl to help identify major trends on each social media platform.

To show how we might use the demographics information for each social media platform in combination with Scraawl’s analytics tools we developed a test case. We decided to run a report on each platform, using the same keywords, to evaluate the different types of content we found on each platform. We chose to run a report on the term “machine learning,” and compared each of the top word lists.

Twitter is a social media platform that follows the short, frequent post structure of micro-blogging. Each post is capped at 280 characters, which causes the communication style to use abbreviations and brief sentences. Twitter is designed for a speaker-to-audience relationship, meaning it is ideal for celebrities to speak to their fans and for news networks to disseminate breaking news quickly. Twitter has a few key means of communication and interaction. Tweets are the foundation of Twitter, and are typically original content, often containing images, videos, or links. There are 3 ways to engage with tweets: Reply, Retweet, and Like.  Replies place a comment on the original tweet, and allow for a conversation to take place about the content. A retweet is a way of sharing content found on Twitter with your followers. Likes are a means of showing agreement and support for a tweet. 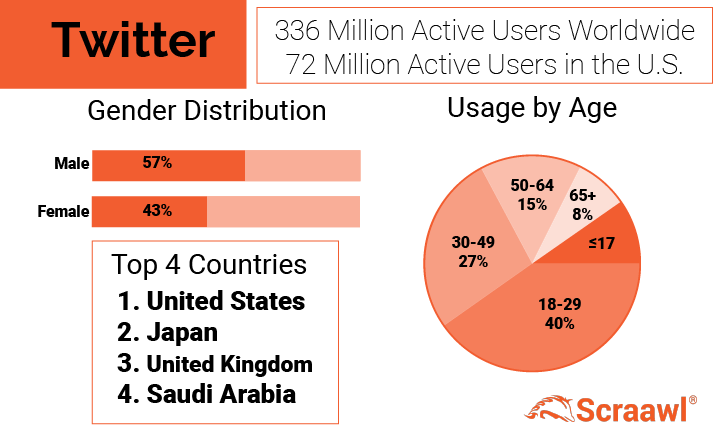 Of the 336 million active users on Twitter worldwide, accounts in the U.S. make up approximately 20% of Twitter’s accounts. The remaining 80% of Twitter users are from outside of the U.S., most notably from Japan, United Kingdom, and Saudi Arabia. Users in China also represents a surprisingly large portion of Twitter’s total user base. An estimated 10 million Chinese Twitter users have worked around the country’s firewall to access the blocked social media platform.

The worldwide gender distribution of Twitter users is tipped toward men, who make up 57% of global users. In the United States, however, these roles are reversed with women holding the majority of Twitter accounts.

As an example of the kind of data analysis that can be done with the platform: on Twitter, we retrieved 10,000 posts for the words, machine learning. The top words list gives us some insight into the overall conversation: Learning, Machine, Apple, Siri, and Google. Since Twitter is a speaker-to-audience style platform, it is not surprising that 3 of the top 5 most used words on Twitter relate to major technology brands that are frequently in the news and also manage large marketing teams. After looking at the posts mentioning Apple, Siri, and Google more closely, we found that many of the posts were referencing a recent news event in which Apple placed a former Google AI expert in charge of the Siri and machine learning development.

Tumblr is a micro-blogging platform that focuses on personalization and customization. Tumblr’s content is unique in the social media landscape, because a large portion of it is stream-of-consciousness postings. Tumblr is also unique because of its poor search features, which the platform states are intended to provide tumblr users with anonymity and privacy. Tumblr is designed for semi-private communications, where it is nearly impossible to find a specific tumblr account without the user sharing the link directly. If Twitter is comparable to a speaker presenting to a packed audience, tumblr is equivalent to talking to a wall; someone might overhear you, but there is no expectation of an audience. Although this platform offers many challenges compared to the more audience-oriented social media platforms, tumblr also offers honest insight if you can find the right conversations. 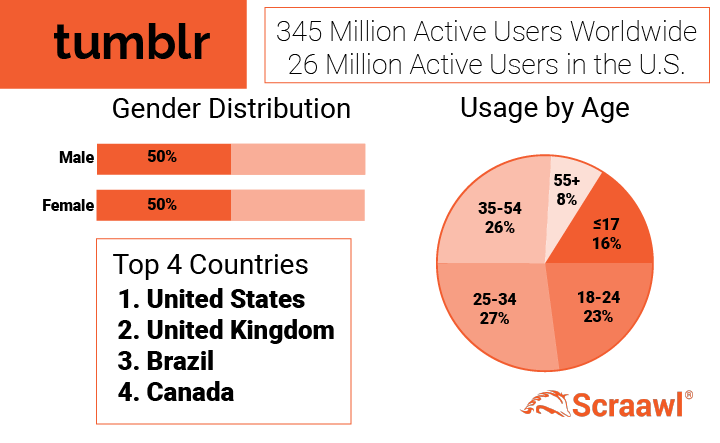 Tumblr appeals primarily to teens and young adults interested in self-expression. About 66% of all visitors to tumblr are under the age of 35, with 39% under 25. Of the total U.S. population, about 13% of 18-29 year olds use tumblr. Unlike other social media sites, tumblr users are divided equally between genders.

The United States is tumblr’s highest source of traffic, accounting for 31 percent of all its users. The top 4 countries in terms of tumblr users were: United States, United Kingdom, Brazil, and Canada. The average visit on tumblr is around 14 minutes, which is longer than on Facebook or Twitter.

On tumblr, we retrieved 1,500 posts. Our top words list reveals a very different conversation than that of Twitter. Within the top 10 most used words, only one brand name, Google, appears in our results. Instead we find more words related to the field of machine learning, such as Data, Intelligence, Neural, Deep, and Artificial. When evaluating the Raw Data we found that tumblr had the more in depth content, including examples of successful machine learning projects, sophisticated tutorials and explanations, and niche-based machine learning news stories. 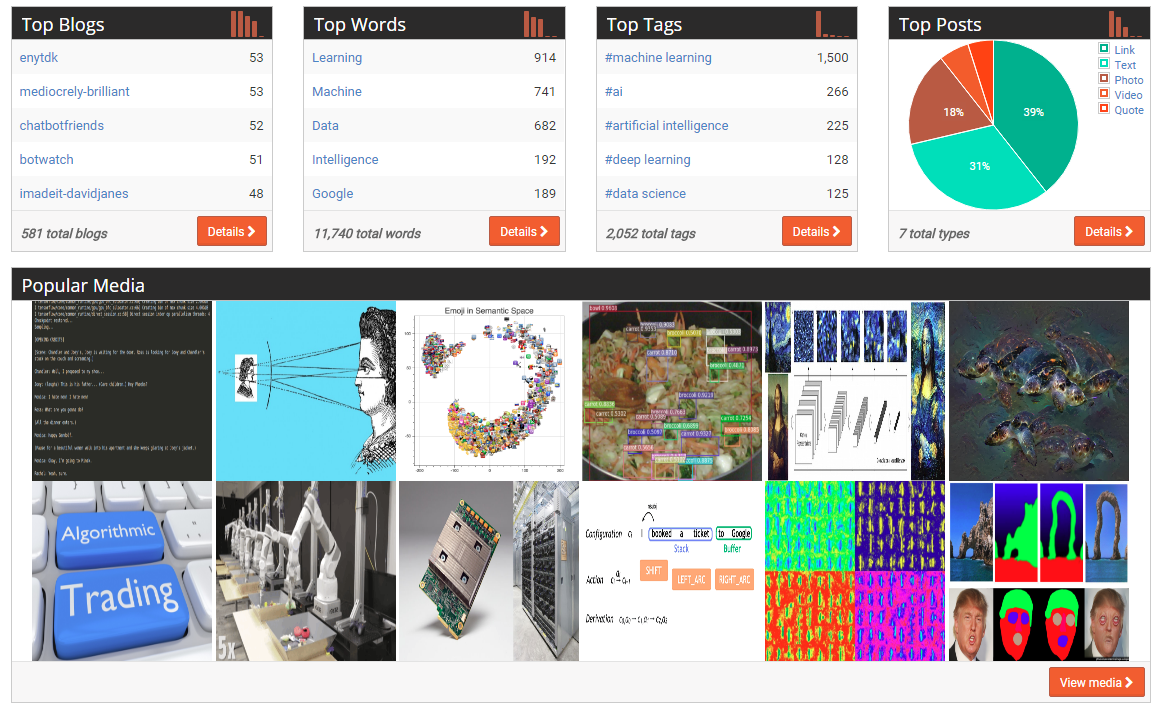 Twitter and tumblr are both microblogging platforms, and they both appeal to young adult users. The two platforms differ significantly, however, in the communication relationships that are fostered. While Twitter is a speaker-to-audience relationship, which is ideal for brands and celebrities, tumblr is less centered on the audience. Instead, tumblr’s long form posting and anonymity make it ideal for finding authentic opinions and expertise.

Stay tuned for Part 2 of this blog.

Alexis is a Digital/Multi-Media Artist for Intelligent Automation, Inc. She has a passion for video production, writing and graphic design. In her free time, Alexis loves to draw. She lives in Maryland, and posts her art on her Instagram @alexislow5